Dorchester Search and Selection has been actively supporting British motor sport since 1995, initially sponsoring the Formula Ford category at Castle Combe in Wiltshire and progressing to supporting our own Formula Ford driven by partner John Hutchinson.

In 2000 & 2001 the Dorchester team achieved their aims, winning back to back outright championships in dominating style with support and sponsorship from http://www.quicklight.co.uk and http://www.triage-services.com. With the relocation and expansion of our Northern Office from Cheshire to Yorkshire in 2001, we decided to support and compete in the 2002 North West Formula Ford Championship. This enabled us to keep in touch with and develop our client and candidate base in the North West area. The support we received was overwhelming and we would like to thank all of you who came along, many to simply enjoy a day racing and to meet John or one of the Dorchester Team. Those who came were rewarded by some great racing and despite stiff competition the team again won back to back championships in 2002 and 2003.

In 2004 John took a year out of competing in motor sport to become a qualified instructor. In 2005 we were approached by one of our clients a Bulgarian property investment company http://www.edendevelopments.co.uk looking to sponsor a Formula Ford in the BRSCC North West Championship. Whilst the deal was put together too late for a competitive challenge for the 2005 championship the car ran at some of the rounds in preparation for a full on bid in 2006.

2006 Opal Telecom Formula Ford Champions… Championship number 5… With a strong entry of around 50 cars we again came out on top and finishing in strong form winning all 6 of the final rounds. We would like to thank Eden Developments for their support and a special thanks to all their staff and customers who came to support us. Eden Developments benefited from having full unedited race coverage featuring their winning car beamed to viewers across the UK and Europe in a series of ONE hour programmes on Channel Five and Motors with audience viewing figures towards half a million per programme. 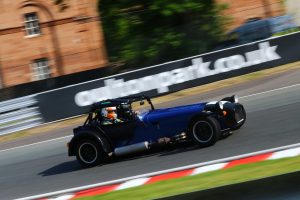 You Can Get on Track … John is a Qualified ARDS Instructor (Association of Racing Drivers) and works closely with BookaTrack.com you can take your own car or hire a Caterham or Ginetta with John or another qualified instructor by your side, we can organise Corporate days for you to treat your Customers and/or Staff. John is also available for 1 to 1 instruction for Race Drivers , Track Day Enthusiasts or simply Experience Days in a choice of cars  …  or in our own Caterham 310R race car.